The Next Urban Powerhouses: 10 Smaller Cities Poised to Skyrocket

Everyone obsesses over the handful of smaller cities that got the secret formula just right and have exploded into some of the nation’s biggest economic and trendsetting powerhouses.

It can happen quicker than expected. It wasn’t long ago that red-hot (and ultra-expensive) cities such as Seattle, Nashville, TN, and Austin, TX, were considered sleepy or secondary markets. Ah, memories.

When cities reach the exclusive and ever-elusive boomtown status, they find themselves bursting with good-paying jobs, world-class culture, and Instagram-worthy foodie havens. Homeowners who got into these magical markets early can sell their homes for megaprofits. But those trying to buy into them post-boom might find the entry price too steep.

So savvy home buyers wonder where the next generation of powerhouse cities will be. That’s where the data team at realtor.com® comes in.

We crunched the numbers to figure out which small and midsize metros are poised to hit it big. What we found: unexpected places that are millennial-friendly with tech job growth and proximity to bigger cities where prices have gone insane.

“We’ll see small cities continue to be growth centers,” says Chris Porter, chief demographer at John Burns Real Estate Consulting, a national firm. “A lot of them are in the South—a region with great affordability, a business-friendly environment, and warmer weather.”

We looked at data* from the 200 largest metros, factoring in population, income, home price, and building permit growth; employment figures; and cultural amenities. We excluded the 15 largest metros to keep big-name cities such as New York and Dallas off our list. And we included only one metro per state to ensure geographic diversity.

Herbert Caen, who penned a column for the San Francisco Chronicle for nearly 60 years, wrote of his beloved hometown: “A city is not gauged by its length and width, but by the broadness of its vision and the height of its dreams.”

So where are the next dream towns? 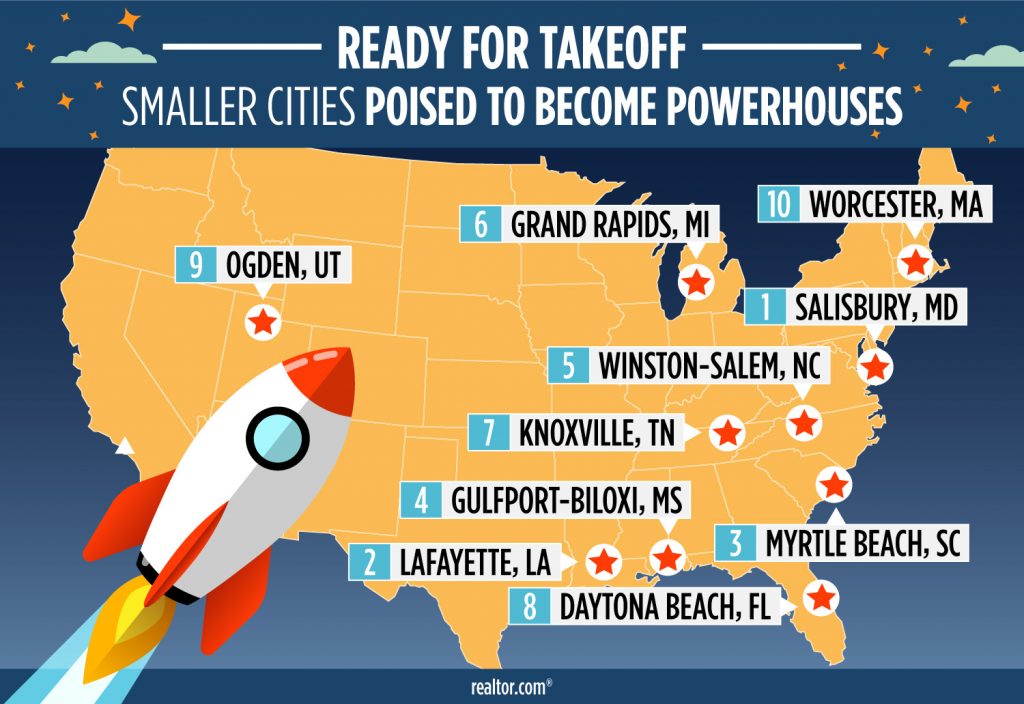